Marcy was not h 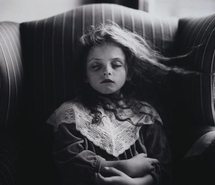 erself today, her mother said when the school called. She was under the weather and she could not play with the other children. Marcy’s mother began to suspect that her daughter was not herself very early on that day. Walking up the stairs Dolores Trundleman smelled something ripe. It flared her nostrils and she gagged in the back of her throat, heaving at the top step. In the hallway the stench began to swell.

Reluctantly, and in fear of the retching odor, Dolores peered down the dim space cautiously. A faint orange glow was coming from the floor. Creeping towards it Dolores’s stomach turned and she vomited on the beige carpet. The glow illuminated something foul, something stinking, something dead. Then she realized it was not something it was several things piled up.

Groping for the hall light she flipped the switch in anguish, wanting more honestly to run back downstairs to her master bedroom and phone her husband to come home immediately, for something was horribly wrong. With a faint ‘click’ Dolores stared in violent stillness at the grotesque heap in front of her: half rotted animals were neatly stacked in front of an EZ Bake Oven. Roadkill waiting to be cooked, with maggots wriggling free on the floor, exposed internal rot festering in with putrid black mold and once vital organs spilling dryly out.

DING! Dolores’s tensed frame spasmed into the wall, knocking a family portrait from its perch behind her to the ground. Mitchell wore a tie Marcy gave him for father’s day, it was red with tiny black flowers on it, it matched his black suit jacket and pressed white shirt. Dolores had donned a tasteful red cap sleeved dress to match her cropped auburn hair, and Marcy, Marcy was dressed in white with a black sash smiling angelically at the camera. Her dark curls springing about in delight, much like now as she stood in the hall facing her mother holding their half devoured house cat, Claude, in her tiny hands like a turkey leg. She was eating out of his belly, stripping the fur off where she could. She didn’t even notice Dolores who had now slumped down to the carpet and was creeping away from her child, towards the stairs.

Marcy was not herself today, Dolores told the school, it was probably the because of house cat she ate. You see Claude had worms, that could make any child sick. Dolores needed to stay home and take care of her. Marcy was under the weather.

Mitchell wouldn’t understand. Only mothers understood their daughters. That’s why Dolores would have to let him down gently, so that she could take care of Marcy. She walked back towards the stairs, Marcy was sitting on the steps with Claude’s worm licked intestines wrapped around her like a sash, and she was nibbling at them like bloody candy necklace.

Dolores smiled. “Yes you are sweetheart, he looks lovely on you. Can mommy have some?”

She pouted her little mouth and tearing a chunk from her accessory said, “No mommy Claude’s mine.  Just like Daddy.”