He sings smooth soliloquy in tongues
fluid with sick vapors,
targeting the words which made her famous in this–
argued death of ruffled Cholera,
Polio projection of what ailed her. 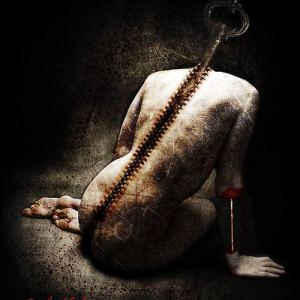 Venomous behemoth suckles cherries
of crimson persuasion,
bloodied from the floor by the front door–
these puddles smolder with sin,
smugglings from the soil
to build her bones of succulent calcium,
mourner’s focus of erosion.

Grains and curses of scattered bloody somethings violate purposefully
the air of cannibal crumblings,
obedient prescription mumblings of overdone hunger–
charred to the core of corpse cryings
as he rocks in grandmother’s chair,
grandmother’s chair built from graveyard hair–
and licks his lips to taste the shawl.

Into veins and arteries 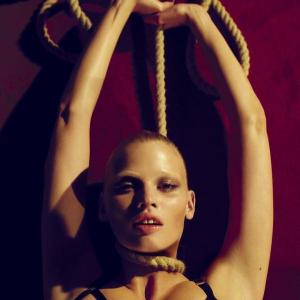 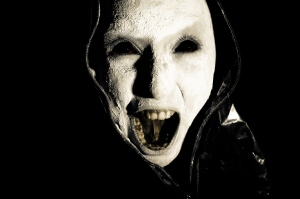 i passed by an

on my way to ballet.

each time i leapt

trying to twirl in mid-air

i would land, ankle crooked 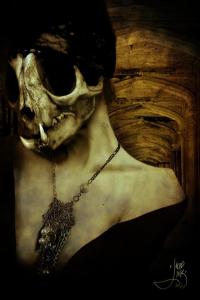 pirouetting in the middle of the road

even more so than at the presence

who rolled boulders away

while my corpse bowed clumsily

on the rough gravelly stage

that took his breath away

and made me feel my age.

as i am wont to

my cheap underwear lined with lace

there’s a whip in the boot

cuffs under my pillow and

a policeman uniform hidden at

she told me she

had dreams and grand schemes

her baby sister one day.

with gaudy motifs on her shirts

her chest still flat and face too flushed

this lanky girl no heavier than my little finger

over and over again

how she would brandish her knife (from the kitchen

where i watched her just make me lunch;

and stick it in the soft

jelly-like folds of her sister’s gut

letting the thrill of the first stab

course through her own scrawny frame first

then giving in to rage

of her weapon of choice.

she says all this with relish

winking at me as though daring me

to be her partner in crime.

“Oh. My. God!” Melissa screamed into the phone. “I know! And did you see the mother?” 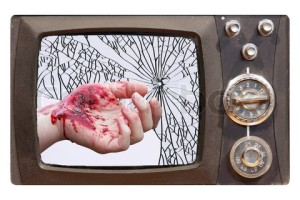 The coffee was bitter when Melissa came down the next morning and she realized it was from the day before. She made a fresh pot and saw the wooden scissors once again. She picked them up and examined them. They were not real scissors, they didn’t open or close. She turned them over and saw something written on the back: Product of X-Shield Productions.
Where had she seen that name before?
Her coffee maker beeped and she poured herself a cup. The front door opened and her son came in.
“Josh,” she said. He didn’t reply. “Coffee’s on,” she said.
Melissa sipped at her own coffee while reading this week’s edition of Scandal-Breaker Magazine.
“Mom?”
She looked up and saw Josh was still standing in the doorway. She smiled. “Hi dear.”
“Would you go somewhere with me today?” he asked.
She considered this. “Ah, sure,” she said. “Where?”
There was a pause.
“I can’t tell you,” Josh said.
Melissa looked at her watch.
“What time would this be?” she asked.
Josh was silent for a few moments and Melissa nearly went back to her magazine.
“Ten minutes?” he said.
She smiled. “Sure.”
Melissa refilled her coffee and took it into the living room. She flicked through the TV channels again, pausing briefly on what she mistook for an episode of Scandal-Breaker LIVE, before landing once again on a face she recognized well. This time, it was Mathilda’s face she saw in the top right-hand corner of the screen. There was a man talking, again in that dull voice. The choose real news voice. She was just about to turn down the volume when something stopped her.
“…the young girl is being held in the intensive care unit at the County Hospital after a…” Melissa tuned out momentarily, her mouth open. Mathilda was in hospital? What happened? She’d seen her on TV only the night before. She had to call Sandy.
“…and the brutal attack reportedly took place on the set of the hit reality TV show, Unnatural Predators. Executives at X-Shield Productions refused to comment.”
Melissa was silent for a moment, genuinely shocked. She hoped Sandy hadn’t already heard the news – she wanted to be the one to tell her. She reached for the phone.
“I’m ready mom.”
She turned and smiled. “I’ll be right out. Go wait in the car, sweetie.”
As Josh walked out the door Melissa grabbed the phone and dialled Sandy’s work line. It went straight to voicemail. Darn!

Melissa drove home, still uncertain what she should feel.
On the radio she heard the familiar voice of Razz Bazz and she decided it was a welcome distraction.
“We now have it on good authority that Janice Jennings, the mother of the late Mathilda, will be the star of her own TV show: The Law Suit. In an interview with the family lawyer, Ed ‘The Shark’ Voorhees, Ms. Jennings will be launching a tort action against the production company for gross negligence resulting in the death of her daughter.”
On to a sound bite: “This sort of criminal negligence just can’t go unpunished,” said The Shark. “And I intend to dedicate the next few months of my life to pursuing justice on behalf of the family. It’s just outrageous how today’s society would chew off its own arm if it meant getting in front of a camera.”
Razz Bazz continued with the report, laughing. “Wise words, Mr. Shark, wise words.” He cleared his throat. “The rights to the show have been bought by Brevacom, the parent company of X-Shield Productions, and should commence shooting this fall.”
Melissa stared at the traffic in front of her and processed the day’s events. And then an idea occurred to her.
After she got home, the first call she made was to Brevacom’s marketing department, where she explained everything, up to and including the death of her only son, and they were very interested in auditioning her for the next season of The Law Suit.
The next call she made after that was to Sandy, and she felt a buzz of excitement when she picked up the phone. After all, there was so much she had to tell her.

“Bang! You got me,” she said, collapsing in a quivering heap. Her breasts heaved one last time while she held her breath feigning death. He stood over her with his pop gun pistol and stroked her soft cheek.
“You fought the good fight, but you weren’t good enough.” He holstered his weapon and walked off into the painted wall sunset, leaving her still warm corpse to collect insects and decay.
She sat up and watched him go, a ghost maybe, a spectre possibly, or just the shadow of a tainted love shot down in cold blood.
“Did I deserve it?” she asked, cocking her head.
“The dead don’t talk,” he answered.
“They do if they’re murdered, especially if they don’t know why.”
“It was a crime of passion, you’re lucky I ended you quickly.”
“I don’t feel lucky.”
“You should, the things I would have done to you . . . they would’ve made Manson’s hair stand on end.”
“Who’s Manson?”
“The godfather of psychopaths,” his eyes grimaced.
She felt a shudder and returned to being dead. He knelt beside her now, he touched her face and pulled out his pocket blade. In her forehead he carefully etched a heart, her eyes were open and watering.
“Why?” she shook.
“There is love,” he answered. “But love dies, just like the soul and body. You and I, we will be in love forever, this is the only way I could truly own your essence.”
“But it hurts,” she whimpered.
“Life hurts, this is merely a pinprick compared to what comes next, that’s going to hurt me more than any knife wound or gunshot.”
She closed her eyes, and let him graze her with the sharp end.
Every incision was precise, he took painstaking care to make the Y cut down her chest and open her up. The ribs were the most difficult to overcome, fortunately he had come prepared with pruning shears to get past the sternum. Of course he needed to get to that finite muscle, protected by stubborn bone and cartilage .

She was cold now, opened like a tin of tuna, revealing the edible innards. He had dug through her body, selected interesting organs and efficiently cleaned her out. All that remained was her exposed, intact heart. It glistened, young and vibrant. He could still see it beating . And as he ran his fingertips across her internal skin the hairs on her arm prickled under his 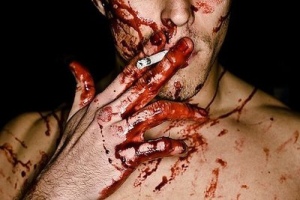 tender caress. Her eyes were fixed on him in that adoring stare and he leaned forward to kiss those pouty, purple, perfect lips. She pressed back against him and her slick blood lubricated their embrace.
“Now you are mine to fill as I please,” he whispered gently into her scalp. 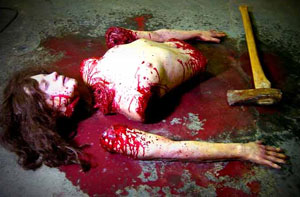 Hells Bells my sister Kate is almost all the way down the well. As her torso plummets and twists into the stony black crater; I gather up her arms and legs figuring I’d throw them down later.

But now I think it’s time for me to refresh and go get a beer.

Sauntering off to my cooler, housed in the cluttered trunk of my car. Oh, how I like drinking cold beer alone, I simply don’t like sitting elbow to elbow in a bar.

With that first foamy sip I think about Kate’s final journey, her permanent immersion into the earth. I think about my family, their stuffy personalities and overall lack of mirth. Always so serious; always so tight; all they ever do is work day and night. Never a vacation; never a short trip; oh well, until tonight, into that cold water their bodies did dip.

Deep in thought I take a second gulp and cup it on tongue; I should have killed them years ago; I should have done it when I was young. But I didn’t have a job then and I couldn’t afford the tools; satisfaction cannot be gained merely with a simple gun you fool. To truly enjoy, you have to scrape off their flesh and cut through their bones and watch it all dry in the sun.

And how that sun hangs so high in the sky, its searing rays I cannot escape. On this flat field there is only a well, and no tree branches for shade. Truly in this instance beyond my family’s demise, it is this ice cold beer that is adding joy to my prize. Those chilling hops and barley and all that frothy fun; you know, I never realized my sister’s legs were this long.

Her nails on fingers and toes are painted in the exact same shade; I marvel too at these talon designs and how they are made. What is that dear reader? No, I didn’t forget her head. Her ponytail is tied to my belt and in this light, my her hair looks so awfully red.

It used to be brown, then blonde, and then some shades in between. It used to be long, then short, and quite sleek but always meticulously clean. So very, very red is her dangling dead head; no, it’s not the blood or an illusion from the sun; it just looks like she had a crappy dye job done.

I have to go home now and I think I’ll make some tater tots. I’ll eat them with pickles; the juice and jar will keep Kate’s head from rot. Of course I will have to shrink it just as I did with Mom and Dad. They’ll all make joyous decorations for my bachelor pad.

It is so nice when the family does things together.

Powered by WebRing.
The Carnage Conservatory
Blog at WordPress.com.