In an open g 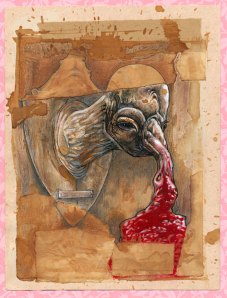 rave, he piled his leftovers on top of one another, according to skin color and hairstyle. Five and then three and then five. It’d been quick, each and every one of them. Bam! with a bullet, several to be exact. Sometimes he used a rusty old lawnmower blade, and sometimes he just used his bare hands, but this time … this time he hammered his love and faithfulness into her skull one adoring stroke of pure rebar steel after another. An owl sat still on the streetlight just outside the window, watching his feckless temper tantrum mature into justified hatred and rage as the light of the moon meandered across the wet cobblestone driveway. He hoped the damn bird would shit on her sports car. Yeah, they’d argued. She called it a chat while she pranced around the room like a gypsy peacock all double entendres and accusations. He didn’t like her smell anymore — some fancy expensive French shit she shoved up her cunt every day — and now he was going to crack her fucking skull open and eat her hairy, beige brain. She was tainted like all the others. Full of herself. He didn’t think so at first, when he kissed her and she didn’t scream, but then a month or so into it, she started talking back, acting above it all. He just wanted things on equal terms. What’s so bad about that? Why does someone have to be smarter, or more good looking, or more successful than another. Maybe it was him. Maybe he was getting a little more out of it each time. Getting a little better than himself, more disciplined, less eager. He looked at himself in the mirror, liked what he saw. He was definitely gaining weight; that was for sure.

One response to “Scoop of Clotted Cream with Bugs”