What kind of music do werewolves listen to? I think a lot of people would say death metal, Satan rock. I mean, I can see 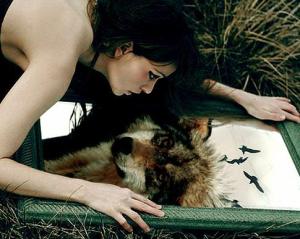 that, but that’s lame vampire shit. Go slit your wrists and bleed on someone, Dracula, give me a fucking break. I get down with a little Goth rock now and again, some Type O Negative and what not, but mostly I’m an alternative punk rock kind of girl, er, werewolf, she-wolf? But tonight I’ve got on Ozzy; yeah, Bark at the Moon, baby. Tonight I have an agenda. Now you may say that Bark at the Moon is some clichéd shit for a werewolf to listen to. Well, you know what? I also like Warren Zevon’s ‘Werewolves of London’ and loads of other transformation-inspired songs. I like to listen to them on nights like this, when I know I’m going to tear someone’s throat out, when I know I’m going to become the big bad wolf they talk about in horror stories. So it’s me and Ozzy at the wheel of my piece of shit car, covered in Misfit stickers, and the questioning song title ‘Mommy Can I Go Out & Kill Tonight?’ flashes in my head. I switch CDs to Walk Among Us — thank you, Glenn Danzig.

He deserves it. I know he does, because I’m one of his beautiful victims. Usually I wouldn’t waste my time with a fucker like this, but he has to be stopped. The girl he’s with is smiling stupidly and I know it’s because she doesn’t know any better, but also because she’s probably a dumb fuck. I don’t want to hurt her, and I won’t, but I’ll probably scare the shit out of her. My large paws flex and my hind legs shiver with anticipation, I suppress a growl. I don’t want to ruin the surprise. I had changed in the alley by Sushi Lounge, so I could stalk him from there and not be seen, what with all the unlit connecting back streets. If someone saw me they would call animal control for fucking sure. I was a large gray and black wolf. Bigger than an average wolf, with bright gold eyes. It would be best not to be seen right now; I didn’t want any more fatalities, just this one.

He was petting her suggestively, sending a wave of hatred down my spine. I’m glad he’s so predictable. I usually reserve my kills for really evil people; I wouldn’t have typically considered him an ideal candidate for my tearing treatment, but he’d proven himself time and again. I didn’t trust average justice for the ones I killed; they were repeat offenders who always got off. This guy was a different breed of murderer. He spread his disease to girls, like this one, whose skirt he’s lifting up right now, delicately fingering her scarce panties. He sold his drugs to kids, like the one who died last week. He was a parasitic virus, and now he was going to learn a lesson.

I crept behind parked cars, this spot of downtown was free of people and onlookers. It was dark and sickly, like the man who was moving in for his own brand of killing. It only took one forward leap to take him down. The stunned girl waited a pleasant moment before screaming her lungs out. I turned and showed her my finest smile and deepest, echoing growl. That put the fear of god in her and she fell back, like an idiot. Giant wolf beast, propped up on your boyfriend! RUN, BITCH! Finally she got it through her skull and sprinted down the street. I only had moments now; she would bring police, that is if they listened to her incoherent ramblings. But I didn’t want to hurry things; I wanted to relish this, because it had gotten personal. I force my hot breath and dripping saliva in his face. I run my teeth against his skin, my fangs caressing his cheek, and I make him look into my eyes, which change from gold to my own human green, and I know he recognizes them. I was waiting for that moment of recognition, because that’s when the real terror seeped in. Up until this point I was a mad dog, and he might be able to get away if he played dead, but now it was different. He knew I was vengeance, he knew I’d come for him and he knew I was going to fucking eat him alive. With a finite snarl and what I imagine would have been a smile in human form, I place my jaws, my steel trap jaws, around his neck. I feel his heart pounding like a kick drum: Do not have a heart attack before I get my kill, I think. I bite down and take his whole throat with me — esophagus, jugular, windpipe, everything. He is now an almost severed head. Blood soaking on my muzzle, I bound away into the night, satiated, in more than one way.

One response to “Some Blood on the Moon”