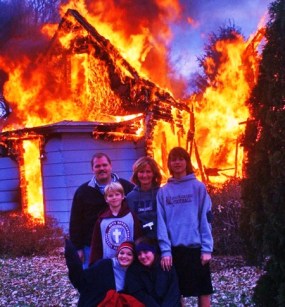 Rick backed the car up into the garage. He pulled the key and the machine shuddered, falling still. He reached into the back seat to pull out his blazer and briefcase, settling the latter on his lap. He ran his fingers across the smooth top, along the crevice where the halves met. He waited for a moment, rubbing the tips of his fingers together and staring at them.

The sound of the porch door closing on the other side of the house. A dog barks. Breathe, swallow, spit.

Rick checked the handle, the spinning lock still set to 1-2-3-4. He spun the tumblers, up and then down, running his thumbs across them left to right and bringing his fingers up his face again and inspecting them.

Opening the briefcase, he brought it up to his nose and inhaled deeply. He pressed the jacket out across his lap and ran his hands down each sleeve, into the pockets, behind the lapels, rubbing his palms into the fabric. He folded the jacket back up and placed it inside the briefcase, set both carefully down in the backseat.

He left the garage and opened up the side door in the fence, walking around the back of the house to the screened porch. As he walked, he watched the long, arrogant patches of yellow grasses growing around the foundations.

Rick opened the screen door and walked inside, the cool shadows inside the house touching the skin of his face, his palms. He ran his hands along his hips and walked into the living room, where he approached his wife from behind, the iron-tinted highlights in her blonde hair looking prickly, abusive.

“Oh, I didn’t hear you come in,” Teresa turned on the couch and looked at him. “I was waiting for you.”

She sighed, crossing and then uncrossing her legs, fighting with what to say. He watched the pale, purple-spotted skin of her ankles. I hate those damn short pants, Rick watched her dangle her flip-flops off of her toes. I fucking hate them.

“The office burnt down.”

“What?” She rose from the couch and came towards him. He couldn’t help but flinch. “What happened? Oh my God, is everyone okay?”

Teresa walked out of the room, where he knew she was dialing the phone to talk to Jack and his wife, to pool all the salacious details into one “made-for-TV” script to chew over. Rick felt his teeth crawl.

The office, all the large, airy rooms and cramped cubicles with the felt walls and the spreadsheets and the smiling picture of kids pinned up in those gaudy plastic frames with the balloons or worse: those haphazard, scrawled drawings with “I love you, Mommy,” and some mutilated figure drawn in purple and the sun in a corner with a shit-eating grin on its face…

She came back into the living room, “Oh my God, honey, they say the fire started in the basement and somebody set it with gasoline and could you imagine?”

“Why don’t you call her back?”

She didn’t say anything, but got up and left. Rick grinned, pleased with himself. She yelled from the kitchen, “Oh my… Rick, there were three people in there!”

Rick shrugged, craning his neck around to watch as the front door opened, “Hey, Dad.”

Ben peered around the living room sheepishly, “Is she in the kitchen?”

“Good, I don’t really want to hear about fighting the crab grass or what is it now?”

“Sciatica? Or is it eczema?”

“Alicia will be home in a minute. They cancelled practice. I saw your work burned down. I passed it on my way back.”

“I don’t know. Something in the walls. The fire got in walls? In the insulation?”

Ben shrugged and dropped his backpack and leapt up the stairs, “Will you be here for dinner?” Rick asked.


At around 2:00 A.M., Rick padded softly down the stairs into the living room. He parted the drapes with a few fingers and sat staring out into the deserted road: the cracked asphalt, the sidewalk planks, listened for suspicious sounds and heard thousands, though none of them made a direct threat.

He went out to the garage. As he unlocked the car, he felt a wave of horror; that this day and all the days before it must’ve belonged to someone else. Someone who had agreed to this: the solid, ranch-style house, the green shutters nailed in place, the holes in the storm windows.

Rick twisted the cap off one jug and began to soak the foundation of his house with the gasoline.

He soaked the front hallway, the floor of the living room, the kitchen with the porch door. He tore a match from the book, wrenching it free from the root, and held it in between his ring and little fingers.

In his hand, he held a tough stem with a bright red bloom that would hiss and tickle his ears like an insect’s dull hum. The seed, the firey bush waiting to be born, a vast red plain that would feed, spread outward and reach up into the sky with its long, spindly arms, killing everything it touched, curling and charring all those hard edges, all the lies and half-truths and lonelinesses; a vengeful, blood-red demon consuming his entire life, a million eyes of fire staring straight up into the moon.

“Five,” he laughed, giddy, moving the match in between his ring and middle finger.

“Four.” Rick whispered to himself, “Three.”

In between his middle and first finger, “Two.”

In between his pointer finger and thumb…

“One.” A shower of fireflies into the darkness; released now, go forth, go forth and multiply.