Ankle deep in blood, I considered ripping the arm off entirely. Rubbed my temples, thought against it. The dead man sat 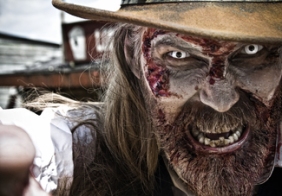 spread eagle, sprawled bull-legged, and arms floppy on the sofa. I pulled back, punched him square in his meaty chest, huffed, and spit. A spurt of blood bubbled up and out from the dead man’s stumpy neck like a fountain of cherry jelly.

A sopping crimson and stubble-riddled lower jaw dangled from the dead man’s neck in a half-moon smile of chipped bottom teeth and a floppy tongue. Lucky I found him when I did. The rest of his head splattered the wall behind me creating a mural of sloppy blood blots and brain sprinkles, an abstract collage of gore.

“So long and farewell,” I said.

He had done himself in on the sofa. My one functioning eyeball twitched and I poked at the other, rubbed the glass pebble, set it back in place. It was a thinking tool, my ocular talisman. I readied the cut-throat razor, the one I pocketed from my once-upon-a-time neighbor Merv. I wedged the blade in the crevice between his wrinkled fingers and the pistol grip, began to wiggle open his fingers. Wasn’t working. Breathed in the stink.

The room reeked of innards, dried human filth and sweat, mostly my own. A burst of gas seeped from the corpse in bellowing puffs and sputters. I pulled the razor out from where I had wedged it and thought hard about this predicament until a simple solution reared its beastly head. I had been right all along:

Chop off the arm.

I paused, opening and closing the razor. No. Too messy. Too much spill. On the other hand, the hand that mattered, a few skin slices from his dead palm wouldn’t taint the decorum any more than it already was. I looked at the moldy orange peels on the table. Everything around me was either rotting or rotten. Thus, I began at once to saw through the wrinkled pink skin of the old man’s hand. Gobs of blood oozed as the skin peeled open. I made it through two of them stiff fingers before the .44 came free, plopped out towards me. I felt hours had elapsed. The sun sagged low. My hand ache from my damned carpal tunnel.

I admired the Magnum behemoth. It was mine. The Magnum had heft to it: a death-beast, stallion of ancient justice. Up until now, things had been primitive. My rucksack, littered with various kinds of cutlery, drooped open on the floor next to the table, lonesome and worn. I’d been using things easily stolen: garden shears, hunting knives, a hand-held chainsaw, crowbars, or hammers, things found in an abandoned garage, suburban kitchen, up in a barnyard shed. The storm left us all a little poor.

I sank my aching bones down on the sofa, forcefully slid the dead man’s rank old body over to the next cushion where it slouched, arms limp, fingers missing. The drunken horseman. Good old stubby. I let out a little tune:

Good old stubby, with fingers so nubby, what’s wrong with your head my stubby old friend.

Blood ran deeper into the cushion, felt cold. My ass was wet and itchy. I chuckled a wheezy whine, tried to remember the tune, but it sunk back into the lazy murk of my shriveled skull.

This shack, I thought to myself, pulling one weary leg over the other, is just fine for the night. It was relaxing, despite the gore. Gore was doable. I had seen gore, dealt with it. In fact, this shack didn’t look much different from the camper trailer on the night of the shanty incident three years back with Fredricks and Lucy.

Stomach growled. I caught myself watering over his meaty legs, thought about beer-can chicken, Big Boy buffets, fountain pop and rhubarb pie…would have to wait for later.

Would those bastards find me out here? I doubted any of them things, whatever the hell they were, would make it this far before getting plucked off or derailed or put to rest in some way. There were desperate people out there with firepower.

Hit the river, son, is what my old man would have told me. The swamps called out to him. I had some of him in me.

I’ll get a canoe, string together some chairs or maybe just float away on this damn sofa. Take a freighter down river.

I wiped some blood from the .44 with the dead man’s flannel shirt sleeve and placed my lips around the barrel just to see how it felt to weigh the possibility of firing the sucker into my own mouth. I imagined a fleet of mares stamping up into the core of my face and out the other end with the snapping blare of a bloody tuba. Bullets were rockets. I pushed the barrel in deeper, could feel myself about to gag. Sitting there with the barrel pressed against the roof of my gums, I heard the moan of an old plank on the front porch, the sound of feet on grass.

The front door was still hanging open on cracked hinges. I sank down into the sofa cushion, slid from my back to the floor and poked my head around the edge of the sofa arm. My knees were jittery and ached like shit. I brought the gun out in front of me, set the grip down on the floor, using the loose floor plank for stability to aim. Unhinged a bit myself, I felt my gut rest against the blood-wet wood, stretched out my popping, achy legs behind me. I pointed the .44 right clean out the front door, out into the misty night. Through the black and the smoke, I stared hard with my good eye until things went a bit fuzzy, that is, until a blurry clump of pure white crystallized as the final gust of smoke sailed away. I almost pissed myself with fear. I think I did piss myself with piss.

It was a white wolf, the likes of which I had never seen in my life. She was sitting on her hind legs, gazing at me like an old Indian chief, majestic and wise. For all I knew she could have been there for hours. I sneezed, squeezed the trigger by accident, surprised myself and squeezed that sucker again. Opened my mouth to scream, a wet belch ripped. This was not good. The first bullet shot right out the door, disappeared. The second bullet veered wild, shattered the front window and out into the night. I was howling through all that broken glass and noise, scared myself, I did.

I lowered my head into my arms. My good ear, the right one, rang shrill, a needle scratched spine. Chills. I didn’t dare move, but I had to see if I shot that wolf. I uncovered my head with my hands and brought my head up, looked back out there and there she was. Her gaze pierced through the black, eyes that emanated a yellowish-green: beams of feral doom. The eyes though, didn’t seem to be looking at me anymore. They were looking upwards at the sofa, staring sullen at good old stubby. I couldn’t move, held as I was in the trance of those brilliant orbs, face-to-face with the devil dog herself. That was when the white wolf looked back down at me and, I shit you not, ever so slowly opened her mouth. Clenched between jagged incisors, centered between two blood-stained sword-like fangs was not just one, but both bullets from that .44 Magnum.

The stench in the room rose at that moment in a bouquet of spilled fear, my bowels. Carl, I said to myself. No, she did not just catch those bullets in her teeth. I had only seen one dog that could do a trick like that: Paul’s Maltese, Flap. He’d prance around the house on his hind legs for hours on end with a chewed-up paper plate held in his front paws like he was some kind of waiter at a fancy restaurant, little bow tie around his neck.

I pulled the trigger, this time on purpose, watched the golden bullet glide through my mind’s eye, knowing right where I wanted it to land, right between those headlight eyes. Sweaty hands tightened around the grip and I yelled, pulled in on the trigger again. In that zip of a second, I must have shut my eyes, damn near broke my jaw, teeth grit so hard. The gun clicked empty. Click. Click.

I hurled the stallion of justice straight at that white wolf’s head, watched it miss, hit the door frame, and fall back toward me on the floor. When that .44 Magnum touched wood, that piece of Wild West machinery exploded in a wrathful pop, bullet sank straight into my thigh, lodged in the leg bone. Silence. I almost didn’t scream right away, didn’t and then let that mournful wail ring out into the night. I spun out from my position and yanked on Stubby’s trousers to hoist myself up onto the sofa. Gallons of leg liquid leaked out of me.

That white wolf stolid, mouth shut, clenched those bullets tight. I lugged my body up onto the sofa and leaned down to dig into my bag for some back-up. I kept my good eye locked on that canine, reached right down into the bag, felt the sharp burn of thin steel slide across my wrist. Cut myself on my own tools. A thin stream of blood whizzed out from the vein.

The wolf let herself relax down onto her front paws and continued to stare at me. I didn’t give two hoots; sat there clenching my arm to stop the whizzing blood, while still trying to dig into the bag, get a blade to wield; couldn’t see straight. I peered into the dark insides of the rucksack. Heard my eye pebble drop to the ground and roll over wooden planks, rolled under the sofa. Felt something solid in the bag. I pulled the hand-held chainsaw up and out of the bag using every inch of power in my sloppy body, wheezing, grunting, and spurting red.

The white wolf’s ears were pricked up, tuning in signals from some damn thing. I smiled at her with my sly grin, drooled out and slurped back in a stream of stringy blood. Wrist gash drenched my arm in red. Thing was going numb. I gripped the saw’s handle and thrust my body back into the sofa cushion. Something felt wrong. Good old Stubby was gone. All that was left of him was a body-sized imprint of blood. The splotches of blood and brain were still there behind the sofa, but he wasn’t.

I spun my head around to get a look at the rest of the shack and there he was, outside, standing next to her, headless and proud. His nubby arm stroked her white fur. It was really something else. With his other hand, he had that .44 Magnum aimed right at my chest. Don’t know how he could even see me. I knew at that moment that the mist would come in again from off the fields. I would wait for it, hope for it to sweep them two away. At that moment, for once in my life, I didn’t understand anything. But, damn was that white wolf beautiful. The problem was that by the time I felt it coming on, the mist that is, Good old Stubby had already reached inside the wolf’s mouth with his one good hand and had pulled out the two bullets.