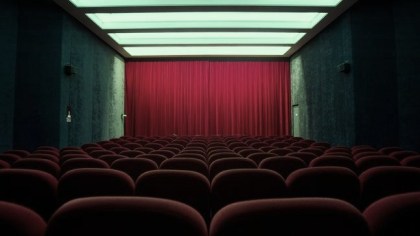 She smiled to herself as the animals screamed in unison, not recognizing her.

The walls of the houses were ebony. The marquee was grey. The letters were scarlet and blurry. Esmeralda couldn’t read the film’s title.

She had purchased a ticket but didn’t understand things, how it all fit together. She clutched the ticket tightly in her hand, soaking the paper with her sweat. Her black fingernails bit into her palm, almost drawing blood. She could hear the blood rushing in her temples as her stomach grew bitter.

She was outside in the seething July mist at 8 pm, a normal time for a show to start. She peered in through the glass doors. In the lobby the poster frames were vacant.

The box office was closed again and she didn’t understand how she had procured a ticket. Her leather boots were scuffed. Her leather skirt was torn. Her leather mind was spasming, but the door was open and she walked into the theater, stopping briefly in front of the box office to stare at her reflection in the black glass – the glass that had a vacant stare behind it. A shimmering faint green wisp appeared briefly behind the glass, then faded as slight noise touched her eardrums and an odor of burnt hair tickled her nostrils. They spoke to her. She was wet deep inside and fear was incrementally growing. Hoping that no one noticed she gently caressed her vagina then tasted her fingers.

She ignored her senses and walked down the hallway.

“They’re looking for me,” she whispered to herself. Her mouth tasted of blood, She spit into her hand to see if  her saliva was red.  She stared at the crimson puddle gathered in her cupped palm. It pulsated slightly. She brought her cupped palm up to her face and inhaled the mixed aroma of blood and vaginal fluid.

“My name is Esmeralda,” she whispered to herself.

Her wrists had red marks all around them.

A fraction of the universe was sliced off by a knife. Severe thin cold fingertips gently, lightly caressed her face as she walked down the hallway to the cinema gently touching the pock-marked plaster walls. She couldn’t discern the colors of the walls. She was greeted by dank sounds and mildew wafting past her face.

Esmeralda was startled when she came up against a heavy velvet curtain. She breathed deeply and gingerly stepped past the decay and into the theatre. She could barely make out the seated figures that were staring at the screen. Looking straight ahead they paid her no notice. She sat down in the last row. The screen was blank.

She frequently desired to see her face, so for the 7th time that evening she reached into her purse and took out the cracked hand mirror she always carried with her. As she admired her image’s reflection, two red orbs appeared, superimposed over her hazel eyes. Esmeralda smirked at the image, gently licked the mirror and placed it back in her purse.

As she sat in the theatre, her flesh started to slightly tingle. Gentle pale hands were caressing her thighs, she could feel it as she squirmed in the seat. The hands had appeared spontaneously, having been dormant for so long. It’s owners ahd smelled her and they had arisen. She looked down – a pale wispy female face was smirking at her, white plasma dripping from its lips. It mouthed words that she couldn’t understand, yet were faintly remembered from another incident. Translucent in the extreme, the face rose up slowly, revealing that it was attached to a willowy translucent body that eventually straddled Esmeralda and wrapped her arms around her.  The figure’s tongue, moist and white. licked her eyelids and gently worked Esmeralda’s lips apart.

Esmeralda had never been as aroused as she was at this particular point in time. A thousand clocks gently ticked and outside on the street the animal chorus was aroused again. When the figure had finished, it vanished and Esmeralda realized that she was sitting in a puddle of mutual female juices and white goo.

A whirr of a projector drew her out of her reveries and she once again stared at the red marks around her wrists. Her skin was clammy now instead of being flushed. The walls were still breathing and a knife fell from the ceiling landing in the seat next to her. A gift from the mother of all those present.

“Use it,” was whispered into her left ear.

The figure’s breasts heaved under the synthetic flesh. Her eyes burned through the latex and accused Esmeralda, who orgasmed twice. A national climax.

The only thing she desired right now was for the film to start. Whips cracked in the background, in the space behind her head. Her forehead was burning and her ebony hair was damp. Ther was exhilaration among the patrons as the projector whirred, illuminating faint particles of dust in the space above her head. Several seated figures slowly clapped faintly. There were no previews, straight to the main feature.

She prayed as her skin glistened in the faint light and the sounds of leather punishing skin subsided; ebbing pain and slow smiles were present in the air. Several butterflies collapsed on the floor around her and she ground their bodies into the wooden floor with her vinyl black stiletto booths. They only screamed for a moment, but disturbed the other patrons, who were discovered to be female, pale and in possession of glass-like eyes that burned through the darkness.

Esmeralda took the knife that had fallen earlier, flicked it open and drew slight lines over her red wrist marks, just enough to draw blood. Faint crimson always made her smile.

“We are born into here screaming and we leave here screaming. Some leave quite vocally, some in a more subdued fashion, but there is always the scream: external or internal – it’s all the same.”

“Welcome to the plague years.”

The stink of the subway, the specters slime on board, some in shock some too stupid to realize what is going on. A mistake forever.

The scantily clad women from nubile to way past prime are there also. Some breathe heavily, heaving. In heat. Somnambulism.”

“Are you ready?” a woman said.

Smilng,  she put the gun in her mouth and pulled the trigger. The night was crimson. The dark smelled of plasma and heat.

“He walked home having lost her love.  The streets, wet after the rain, crunched ever so softly under his boots.”

“Divine revelation from the night,” the spectators chanted.

Bombarded by these sensations, Esmeralda rubbed between her legs as she usually did when in a panic. Her fingers reached under her skirt, parted her labia, and she fucked herself raw. The pleasure washed over her and she felt slowly drained as her wrists bled. The spectators cheered and floated gently over her head in front of the screen.

Her eyes rolled upwards, she spasmed cold and fearful. Afraid, she panted and her legs shook. Sweat rolled down her thighs. One tear fell from her left eye.

One of the figures tongued her ear, gently intoning, “Divine revelation from the night. I love you.”

She was hers. The clocks ticked louder and the sounds of whipping had ceased.

“Can’t tell one from the other.”

The audience filed out, back to the black houses. The projectionist was never seen again.

One response to “3rd Place Campfire Tales Ghost Story Contest: Another Night for an American Wife by Peter Marra”