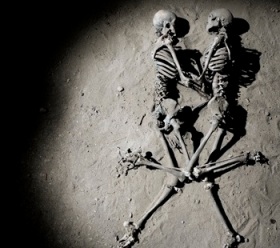 Styles of provocation,
mourn the projection of hair and bone.

Throated disgust with dirty shadows,
perky and deathly upheavals
poke your insinuating grains,
farm your insides–
to manage the dogs,
sickly at your lap.

Buttocks of the opinionated,
burn the gravy–
an upset for the cannibals,
tongues lining chocolate rims.

She always wondered how much damage could be done to a person’s skin with an ice skating blade. Was it sharp enough to cut? To draw blood? Could it sever digits or saw through bone? Alice sighed as she skated across the pond, hearing her brothers shout as they sledded down the hill next to it. They laughed and shrieked. The balls of soft snow they threw at her crashed and broke into smears of powder as she twisted her body over the ice.
“I’ll kill you!” she called out. Her voice was light and singsongy and she likened it to the air in the spring when it was just beginning to warm. It held the scent of flowers soon to bloom.
“Not if we kill you first!”
Her skates sliced deep into the ice. Her shoes were old and made of leather, but she sanded the blade on the skates every week to keep them sharp. She liked the designs it made on the ice—swirls and loops and curving arches.
The three boys finished sledding and wandered over to the pond.
“Ice looks thin,” Bobby said. “What if you accidentally fell through?” 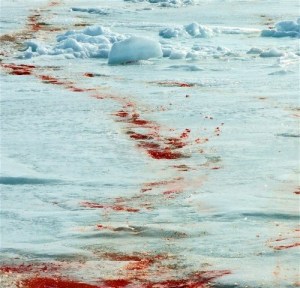 “It’s the dead of winter, fuck head. The pond’s frozen solid.”
Her brothers drew a tight ring around the small pond. They stayed along solid ground, their faces pinched up in fear. Her pond was a safe place. Little Johnny and Freddy were so scared of drowning they wouldn’t even swim in it during the summer, as if by some feat of strength she would pull them down to the bottom and hold them there.
Alice smiled. “Come join me, Bobby.”
“Why don’t you come out here?”
“What are you, scared?”
A reddish brown eyebrow rose. She hated the color of Bobby’s hair. It reminded her of rust or old blood stains.
“Come on out. Scaredy cat.”
“Shut up.”
“Make me.”
“Get off that damn ice and I will.”
She spun in a frenzied circle on her skates, neck craned so far back that she could see them hesitating on the pond’s edge. If she fell at this angle, her neck would surely break. She would be paralyzed from the neck down, unable to walk or skate or feed herself. But that was the beauty of skating. It was an art, really, the way a skater learned to turn and hold their body while they flew across the ice.
Alice closed her eyes and felt the wind pushing at the back of her neck.
“Fine. See how mouthy you are when I get out there.”
Her eyes opened and she turned to see Bobby making his way slowly out onto the ice. His nose was red, cheeks chapped, his hands out for balance. He tottered. He was a sloppy, messy boy and that is why she hated him.
Alice skated around him in a circle, smelling the old diesel on his jean jacket. Her nose crinkled. She swerved around him so close and so fast that she almost knocked him over.
“Hey, watch it!”
“Can’t stay on your feet?”
She did it again and he faltered, his body lurching forward, arms circling as he wobbled and then lost his balance completely. He fell forward on his face and cried out. Blood splattered across the ice.
“Oh, dear,” Alice laughed.
A vicious puddle of red spilled out from Bobby’s nose and lips as Johnny began to scream.
He tried to stand up but kept slipping. His gloved hands spread flush against the ice, trembling under his weight. Alice didn’t even think. She shot forward and her skate glided over the outstretched fingers of his left hand. The blade was sharp. She cut completely through three fingers and left one half severed. It hung crookedly from his hand.
Bobby howled.
“What the hell is wrong with you?!”
The words fell, cluttered and imprecisely formed, from his mouth. He inched slowly towards the frozen grass line and she let him go, weaving her blade through the thick splatters of blood until it was fully coated. That was when the smell of ammonia hit her. She turned.
The seat of Bobby’s pants was soaked. She watched him as he struggled back to land and hobbled inside with the others. Her laughter cascaded across the open hills.
“Told you,” she said. She cackled and slapped her knee. “I knew you were scared!”
When her father came roaring from the house, she was still spinning the blood circles, curls, and loops. The smears looked like shading and the red stretched out across the entire surface area of the pond.
After finishing one last curl, Alice stopped skating and looked down proudly at her masterpiece.