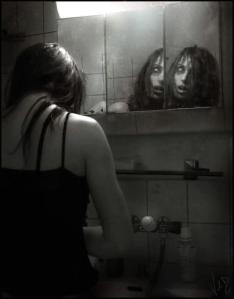 (13 television channels but only 7 are active)

The body the bare and the beautiful

Channel 1.
She moaned he sighed
soft buzz background
drips slightly on
the black and white photos branded in her brain – the aroma
tantalizes her nostrils as her cunt drips.

Channel 2.
the people are
talking slowly in a very dirty way,
she lets her words flow slightly between the apparitions
of her mother and father nailed to the smog.

Channel 3.
His anguish was laughable
she’s thrilled
by experiments with magick and animal instincts
and with electricity, razors, and lingerie;
she demonstrated by orgasm what was sassy and what was taboo
like the smoke of vintage nudie pics and flesh burned at dawn –
coating the back of her throat
a taste of a pyre.

Channel 4.
Her pleasure was quite audible
she licks
the flesh raw:
the skin of the lovers hanging from her cracked plaster ceiling
are the first taste.
she was checked out to be clean in prison
slowly by day
quickly at night.
it’s a velvet touch that grows increasingly
rough – her eyes glazing over as his wails become
faint echoes of doves flying overhead flying too close.

Channel 5.
all she wanted
was a piece (while he lay dying)

of the nudie cutie that he underestimated – a quick fuck
slowly turned into a slow death –
amidst squeals of pleasure, her father called the police

before daddy died upright in a plexiglas cage.

Channel 6.
time quickly
snuck up behind them
tick-tock-click unending
their sweat flying out in swirls
in the 900 slime room with the
thermostat busted

Channel 7.
white-noise caressing
iron taste in their mouths
she knelt and her nipples felt the blood:
lying in wait by the reflection of the ny police dept. phone system
her blouse opened down to there she
got what she wanted. some death in a new york city street

Channel 8.
the storm was gone
the rotten wood coffins floated into the street
under the constant throb of
generators pumping lanterns. bang.

Channel 9.
she thought
the tissue could be better organized
she felt fortunate to still have shiny knives
and the slick soft scratchy noises of flesh being sliced started
to tingle her groin
at this time the daily news reporters wrote about
the unblinking eye that said “let’s go”

Channel 10.
she took
his cock stem from almost any good deed:
and as she struggled she took as well his ritual magic
they both smiled at his humiliation
a good ju-ju a burning fetish
can stem the change of a burning object

Channel 12.
it posited fetishism
as the earliest form of reasoning
as she licked juices for a contract to ensure compliance.
she knew objects dictated the social activities.

she was still attached to what is typically called religion

Channel 13.
she verbally
clarified her actions
as juice gushed out of electrified panties
and silence nestled between her breasts
looking for a beating heart
that apparently had been removed
and thrown into the fireplace