Shepard walked down the center of the old two lane road heading nowhere. It was hot and the sun seemed fixed behind him. The cumulus clouds that littered the sky did provide shade from time to time, but it was short lived. There was a slight breeze that blew in from the northwest, so he was thankful for that. Flat farmland surrounded Shepard on all sides. The fields had been abandoned long ago. A few corn stalks scattered about serve as an eerie reminder of how things used to be.
Alone, Shepard travelled with no destination in mind. The hiking backpack he wore carried supplies; mostly canned food, bottled water, and 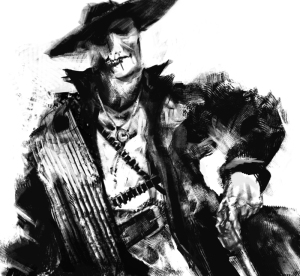