Two years ago, I met the love of my life. Ten months ago, I made her my wife. 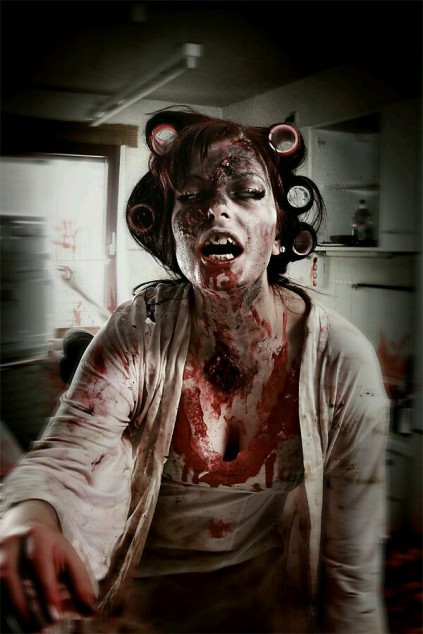 Two weeks ago, I chopped off her head. In my defense, she tried to kill me first. But I

don’t hold a grudge. How could I? She’s the love of my life.

Ours was a romance too fantastical for fairytales, too cheesy for Nicholas Sparks.

And the sex? Jesus. You know the kind of sex middle age housewives in the grocery

store checkout lines think Brad and Angelina have every few hours? Trust me,

Brangelina’s sex life was like your grandparents compared to ours. I don’t tell you this to

brag, though; I’m telling you so you’ll understand why I did what I did.

Even before the deadheads came, we never had much food in the house. So it

wasn’t long until we were down to a sleeve of crackers and some mustard. Neither of us

wanted to go outside, but what choice did we have? I couldn’t just sit there and watch her

starve. Like I said, she was the love of my life.

Unfortunately, our first run didn’t exactly go as planned. We found some food, but

the deadheads found us on the way back, and she got bit. We knew it was a death

That night, I caught her trying to sneak out. Said she didn’t want to burden me. I

held her and told her everything would be okay, that I’d love her forever, no matter what.

I kissed her on the forehead, then on the mouth, and then, well, it should come as no

surprise what happened next.

In the middle of it all, on tiptoes and bent over the couch, she turned. La petit mort,

indeed. I couldn’t see her face, and just took the increased moaning and thrashing as a

sign that I was doing something right. Imagine my surprise when I turned her over and

she snapped at my jugular. Take it from me: if you’ve never tried fucking your wife

while she’s trying to eat your face, I wouldn’t recommend it.

I pushed her down, ran to the door and grabbed the axe we’d kept there since Matt

one swing, it was over. Her head rolled across the floor and hit the wall, biting at the air

When I came to, her eyes were locked on me, her teeth still snapping at the distance

between us. I got up and placed her now lifeless body in the bedroom, put on some heavy

gloves and carried her head to the kitchen table. Then, using a pair of rusty pliers, I

ripped out her teeth, one by one.

That was two weeks ago. The skin around her gums has pulled back a bit, and her

I can’t stop thinking about her smile. About her mouth. About the things she used

to do with it. I see her tongue, licking over shriveled gums. I try to hold out, but I’m only

human. Slowly, I unzip my pants and place my hand on top of her head. She opens her

mouth and takes me in.

I’m not proud, but I don’t think she minds. She’s still the love of my life.

Larry Hinkle is an advertising copywriter living with his wife, two dogs and a cat in the suburbs of San Antonio, Texas. His work has been published in Suspense Magazine, Cemetery Moon, Theme of Absence, 365 Tomorrows, The Drabblecast, the zombie anthology Life of the Dead, and twice inSanitarium Magazine. He was also named an “Honorable Mention” winner in Allegory.

He hates pretty much everything else.