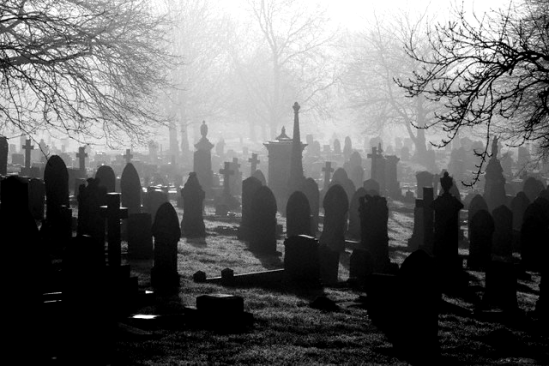 Alex used to play with the dead until one of the dead played with her. She slid her slender body down the dry earth of Andrew Reese pressing her pubic bone into the dirt talking out loud about how she wanted his brittle frame to engorge itself on top of her, filling her with all his unfulfilled lust and vile fantasies that rotted in his rattling skull. She pictured his decrepit fingers, alive and stroking her inner thigh tickling that special spot that got her soaking from the inside.

Andrew Reese Born Oct. 13, 1906 Died Oct. 28, 1929. The cemetery was ancient and well cared for, grass always spring colored, blossoming like her opening flower on dear Andrew’s eternal resting spot. No doubt even the dead could smell her moist cunt as she writhed on the headstone, gripping it with excitement as she merged her flesh with mottled moss that had formed in the cracks of aged stone. She sprung back and straddled his imaginary coffin, licking her fingers as she rubbed herself harder. “Oh Andrew! Right there!” she screamed, her flimsy white night gown now soaked with dew clung to each curve in its extremes, spotted with dirt and green from her deathly orgasm. Flailing on the grass she felt someone clasp her wrists.

Alex’s eyes burst open, nearly splitting their seam, as she felt something hard and real fill her chasm with every inch of pure pulsation, something living, something convulsing within her loins. But there was nothing. Just the weight on her chest and hands pinned back behind her. Alex often excited herself to frenzy on the floor of this very graveyard but as she began to moan with the sex act this felt not of imagination.

Suddenly flesh wounds opened under her gossamer gown and she felt sex scars tearing at  her body as she was flipped over and her hips yanked in the direction of the penetrating phantasm. She screamed, this time not in pleasure but unequivocal terror. Alex was being torn apart, with each thrust great chunks of bloody muscle were plucked from her back. Tossed to ground the spectre came at her again, forcing her arms to her side while organs began peeking out through slashed skin. Whipping and wailing she fought against the demon on her belly that seemed to be extracting her very womanhood as her paralysis held fast. She felt a hand move up her breast hovering over the pointed nipple gently aware of its precise feminine exquisiteness, she held her breath, then with searing pain a sick ripping sucking sound followed and nothing but pain roared from her former cleavage.

The morning mist rest damply on the still shiny wet grave of Andrew Reese, sopping with upper and lower intestines. Alex’s sweet flower had been separated from her pale thighs, now caked in dried blood. It had been clipped, twisted and made into a human origami project resting atop dear Andrew’s stained marker. Right below the grass line, burrowed where the stone met the earth was the fragile heart. Next to it in near weather worn faded letters was our boy’s darling epitaph: “Here lies Andrew, Maniac, Murderer and Son.”