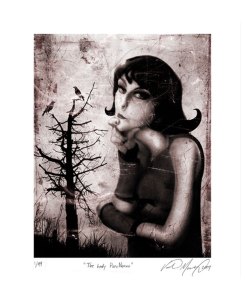 They called her the Haunted Housewife. She wore June Cleaver dresses from the 50’s. They were moth-eaten and dyed black to match the circles underneath her eyes. Her skin was doll’s porcelain, powdered into transparency. Some say she didn’t exist at all, that she was only a ghost who showed herself in the windows of the sinking Georgian manor on Pine Street. Holding a martini for a husband who would never come home and cooking dinner for children that could not digest anymore.

They called her the Haunted Housewife and her black hair was streaked white. Empty bottles of chemicals were found in the trash bin on the mornings after her sightings. Whole gallon jugs of Windex, tile cleanser, bleach and lye. The women would all whisper, what was she doing in there? Did she still clean that house? Did she polish the silver? Did she buff the floor? When did she emerge? Neighborhood children made a game of knock knock knock on her door. They ran away and hid behind the trash can and flaking picket fence.

She used to have a family the older women would say. She wasn’t always alone. One day no one was there, except the haunted housewife. Left to make empty beds, and iron unworn shirts. the police came. Everyone talked, but there was nothing said. Except that the husband and her two boys were never seen again.

Then, the children started disappearing in the woods off of Pine Street. Little boys with chubby cheeks, and a penchant for marble games, shooting things with BB guns. Winchester model. Hollering after a felled squirrel, compatriots would watch them fade into the forest fog. No one saw them after that. Now and then a boy’s sneaker would show up, smeared with mud with the faint odor of cleaning products.

Peering out she smiled, in the dark when they all slept. She was their joke but she had them all wrapped around her bony white finger, little did they know. Mounting the stairs she descended to the basement family room. It was set up just as they left it: trains, tv, molding floral print couch and reclining lounge chair. Underneath the big red wool rug, she pulled pieces of floor, exposing a locked door. Fitting the key carefully into the heavy lock the Haunted Housewife adjusted her heels, and opened up her real home. Down she twisted into the lighted hole where her family had multiplied like bunnies. Her husband sat at his work bench reading the paper, her boys were on the shag carpet with their Erector set, and the others . . well the others had come to live with them forever. Once her husband had said she should take up a hobby, now she was quite proud of her work. Taxidermy was a very considerate art after all.