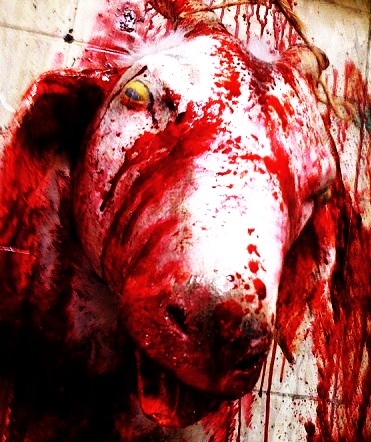 She owned a goat and the neighbors knew it. She kept it in her backyard and would feed it in the mornings. Sometimes the neighbors watched when she fed it. The fence around her yard was low and they could see everything.

One morning she came outside naked. The neighbors were watching her through a slit in their curtains. She was naked and carried a pail to feed the goat. They watched as she fed it, the goat’s mouth in the pail, the naked girl feeding the goat. They watched her, saw her smile as she looked down at the feeding goat. It was right there between her legs, eating from the pail. The neighbors kept watching.

When the goat finished feeding, the girl set down the pail and stood there. She grabbed the goat’s horns and stepped closer. She spread her legs a little and the goat started sniffing her. She reached with one hand and grabbed some leftover food from the pail and shoved it inside her. The goat kept sniffing, then flicked its tongue at her, getting it inside her, getting at the food she had there.

The neighbors couldn’t believe what they were seeing. She grabbed the goat’s horns and pulled the head closer. They could tell she was excited by the goat licking her, eating its food from her. She had now become goat food and from the look on her face as they watched through the slit she was going to be addicted, so they made a point of watching out for her in the mornings when she got off on her goat.

After several mornings of this, they noticed that the goat seemed to be more ravenous when he ate the food from her. He sometimes would buck his back legs and lunge at her, his horns at her exposed belly, naked as she was. They watched and watched, morning after morning, until one day she didn’t bring the pail, just herself. She grabbed the horns and shoved herself on the goat’s mouth. The goat lunged at her, sticking its nose in her, its mouth and tongue appearing to devour her. It kicked its back legs hard and knocked her down, eating at her, even though there was no food in her; she had become its food and it was eating, eating, eating her, not just licking like before but biting her and pulling her flesh apart, sticking its horns in her and thrashing her open, cracking bones. The neighbors couldn’t move from the slit, couldn’t say anything, they could hardly think, hardly even breathe. Their hearts were racing as they stood at the window and watched through the slit as the goat ate her, tore her belly open and devoured her insides until its fur turned from white to red.

The neighbors did nothing, even though they knew they should. They should do something.

goes down slowly with a slight gagging

while the buzz light flickers at full throttle

she spoke about the grimy window

that she used to look through

while wishing that her naked feet were

massaged by cool sand in the evening

framed by the constant weak

murmurs of the ocean lecturing her

turn around look at it

if she could only perform

a vivisection and reclaim what they had taken

then she would be a success

slide back in as thin-lipped razors

turn your face against the stone

turn her face against the stone 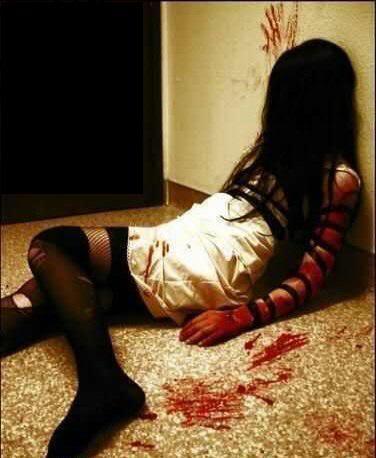 feel the cool licks below

waiting for them to arrive

She lived on the edge, the edge of the cemetery, that is. Their trailer was silver and ostentatious, an eyesore for the dead. Her mother put pink flamingos in the square of fake yard that 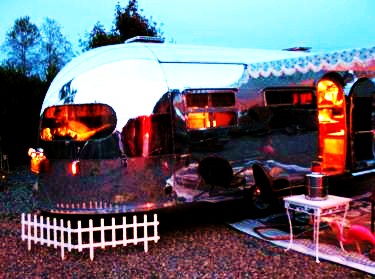 they could call their own, along with other kitschy things reserved for parks designed to house such living quarters. They even had a fake white picket fence that just stuck in the ground, giving their mobile home a comical mimicry of traditional establishments. She was no less strange than the locale of her portable prison. Watery grey eyes rimmed with heavy liner, fried black hair from her mother having curled the locks at temperatures too high and leaving them to sizzle, and thin anemic translucent skin caked in powder. Sadly, Mona  fit in perfectly with her surroundings: a trailer park on the verge of death, graveyard trash. Her mother was a shrill woman who dressed in low-cut blouses and gave ‘it’ away to anyone who would lower her bills, buy her a meal, give her a ride, lend her $10 or to simply fix the crapper of their tin palace. She was a cliche before she even opened her mouth. Lipstick on the teeth, bleached hair with the roots spiking through, chain smoking Virginia Slims and wearing tight polyester leggings that rode up into a grotesque cameltoe. Mona never had a chance.

One day Mona didn’t walk to school, she didn’t ride the bus. Instead she pulled up in a sinisterly sleek 1959 hearse Cadillac. When she stepped out of the car Mona’s hair was full and straight, richly black and beautiful. Her translucent skin seemed to have turned from sickly to a more fine porcelain, and her typically wet eyes were bright and sharp. She was wearing a stylish red pencil dress, which hugged the curves no one had ever seen under the ill-fitted hand-me-downs she usually sported, and her legs stretched long and lean in a smart pair of shiny stilettos. Her carnivorously crimson mouth looked as though she had perfectly applied a coat of fresh blood to her sensuous lips. Mona was a bombshell.

“I wanna make you moan Mona!” several boys shouted at her as she stepped confidently across the high school quad. The teachers did double takes when Mona’s clear voice rang out in class with a sultry “here” at roll call. The girls who usually tortured her during her lunch hour couldn’t even see her through the throng of suitors crowded around the cafeteria table. Lacey Sullivan, grade A twat and life long terrorizer, finally approached her with haughty disdain in the hallway, blocking her path.
“What happened to you MOAN-A, finally start sucking dick like your mom to earn some extra cash? Or did you make a deal with the devil?”
Mona smiled sweetly.”I’m sure you’ll find out soon enough, bitch.” She let the last word roll off her tongue in an evil foreboding way that actually left Lacey speechless

That night there was a party in the graveyard. A Mona party. A party that no one at Westwoods High School would ever consider missing. Their favorite object of torment had turned into Betty Paige over night and was rocking the headstones with three kegs and a live band — what fucktard was going to scratch that off the social event list?

The mouth breathers started spilling in when dark settled over the cemetery, yowling and yelling their battle cries for beer and booze. Tromping through the soft burial ground littering plastic red cups in their wake, while willing breasts were groped by horny hands. The band played on. They danced and fucked and drank, a sinner’s ball of hedonistic overkill. Topless girls played hide and seek behind grave markers, and football studs did keg stands only to spew their foamy guts on Randall Newman’s final resting place. No one saw Mona. Some said they’d talked to her at the beginning of the evening, she’d given them a red cup and pointed them at the keg. A few boys claimed they’d fucked her behind her trailer while she touched her toes. Several girls insisted that Mona was now, and always had been, one of their closest friends and that she was planning something spectacular for the end of the evening. Everyone lost their minds, and passed out on the cemetery carpet of well tended grass.

A pair of slick black high heels entered the graveyard gate and tiptoed over a multitude of unconscious teenage bodies.
“Do you think this enough?” Mona asked with laughter in her voice. “It’s most of the senior class and a couple of randoms.” The deep sharp laugh of a much older man came from the shadows behind her.
“Yes, my dear, I think this is probably enough.” Mr. Grieves emerged at her side with a wide grin and a handsome face. “Well,” he said. “Now the fun part.”

“Lacey, oh Lacey!” she cooed at her blonde childhood tormentor. “Time to wake up!” She drew her hand back and slapped her hard across the face. Lacey’s eyes fluttered open as she attempted to focus on the images before her.
“Wha-what? M-m-mona?”
“I told you you’d learn my secret soon enough bitch!” With swift downward strokes Mona sliced the pentagram through Lacey’s supple belly. She barely had time to squeal before Mona slit her throat and began collecting sweet human nectar from the welling red flower. With a full vial of fresh young blood, she performed the last step of the ritual: cutting up under the ribs and removing her full heart muscle. She dug her nails through Lacey’s tender fleshy entrance and felt her life force still fluttering and warm on her fingertips. Once the heart was secure in Mona’s hands she took the first ripe bite before passing it on to Grieves. Mona moved on to get to work on the rest of her graduating class, their bodies lined up ready for ritual sacrifice. Bellies full with aortic juices, the pair rolled the bodies of their massacre into the dug up graves and patted the dirt on the final hole just as the sun began to peek over the horizon, leaking oranges and pinks into the skyline.

“Congratulations to all our seniors,” Mona giggled, her mouth stained with dried blood that had run down her pointed chin. Mr. Grieves, looking like a young Hollywood actor with fresh youthful skin, circled his arms around her waist and clamped his teeth lovingly on her throat, gnawing at her savory skin.
“My dear,” he whispered. “It is time for us to make our getaway.” Mona grabbed a large molotov cocktail she’d fixed earlier from a nearby headstone and walked to the border of her cemetery. She watched the flame twist and lick hungrily as she placed it next to the gasoline soaked rag.  Then she smashed the thing through the open door of her trailer hell.
“Burn, my lovely.”