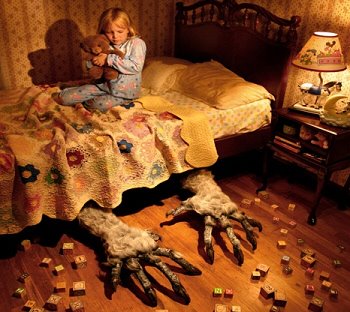 Monty has not been able to sleep tonight.  For the last four hours he has been sitting on top of the covers, and the pillows too, all crunched up with his knees pressed tightly to his chin. Not bad for an over fifty fat guy who has had two hernias and four knee operations.

Monty has not been able to doze off. He has the lights on and is holding a copy of ‘Unabridged Something’ firmly in his right hand as if he is waiting for something to squash.

It isn’t bugs. It’s not a snake or a rat or even a little field mouse.

There is something under his bed. He knows it. He hears it. He has even touched it, or to be more correct, it has touched him. But each time Monty has attempted to get out of the bed, a hand reaches out to grab him at the ankle.

He is holding it like a camel, or least this is what he wants to believe. In reality, he has done something he hasn’t done since age six.

The touch from the hand was icy and slimy. So icy cold, it left a mark that throbs with pain. So slimy it left a thick and oily residue on his flesh. Monty can even see where a chunk of its skin, on his, was left behind. But even without this potential souvenir, in the last half hour, it has begun to groan low and breathe hard. He is afraid to reach for it, to see if it is what he thinks it is.

In the last ten minutes, Monty has begun to smell it; the putrid concentration of flesh rotting.

It won’t respond to Monty’s begging, and as long as the light stays on, Monty believes it won’t come to the surface and get him.

But as the night wears on and the standoff continues, Monty’s worry thickens. He hears a voice coming from the closet. It is a woman whispering his name, seeking a response. Thinking he knows the voice, he leans over to cock his ear. In his peripheral vision he again spies the hand, grasping out from under the bed, anticipating his feet hitting the floor.

The flaking, decomposing, greenish grey hand of grizzled flesh and bone begins clawing at the bed spread. It is now that Monty knows. It’s the ring, the cheap cubic zirconia ring. Monty knows who is under the bed. Monty now knows who is in the closet.

And it does not take too much imagination to deduce who is now knocking at his back door.