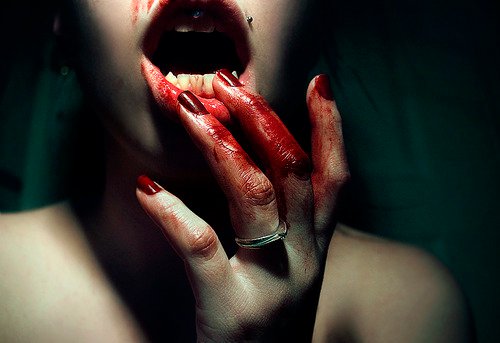 She didn’t do it for money. She did it for blood.

They always said she had a mouth on her.  Back when it happened, just a few years before, when she was in the bar and somebody took her home, when she didn’t feel well, all that rum in her, maybe too much, she kept saying no, no more, that’s enough, stop, I don’t feel well, but he kept on with it, kept touching her, rubbing, prodding, urging, fingers craving, hands pushing, mouth angered and progressively abusive, forcing, pinning down, she didn’t want it, he said she did, it was he said, he said, she couldn’t say anything, she was muted by his lust.

But was that a long time ago? It seemed a century, but it also seemed like yesterday, like just last night.

She started practicing soon after. Started going here, there, all over. One then another then another and then yet another. It was easy at first, she was a natural. But she knew she needed to get better, she needed to get herself in the best shape, her mouth, that is. The mouth was the thing, the suck of the mouth. She always had a mouth, they said. Well now they were going to get the fullness of it.

She kept practicing. She got better at it. Like the one who fisted her hair and yanked her off, who screamed at her that she was hurting him, that he didn’t like to be bitten, just sucked. And then her face, that mouth of hers, blood on her lips, her tongue. His blood. That was it, he said, you’re a fucking crazy bitch.

Well, she was a crazy bitch. She wanted to get crazier. She kept practicing, kept up with the suck.

Another one and another. More, so many more. She invited them over, told them she was lonely, told them she just needed some company, needed them to be there. They had liquor in them, they would come, they would come for sure. They came, they kept coming, she kept practicing, they kept telling her to stop, she was sucking too hard, fuck, just stop, it hurts, oh fuck! But it was fine because there were more, word must have gotten around, some of them heard about her, she had a reputation, they kept coming, some of them curious, some of them not believing the hype. “Man that girl can suck cock!” Yeah, yeah. Girls suck cock all the time, why was she any different. She was different. But no one mentioned the blood. She kept having them over, they kept coming.

And some of them were repeats. Some of them liked it. It hurt like hell, they said to their dudes who asked how it went, but somehow it was hot.

She was getting better. She was making progress with the suck.

Was it years ago? Yes, years. She should have pressed charges. She let it go, just wanted him gone, he left but he was still here, still right here. Where was he now?

She put out an ad. It was short, sweet, attractive. Just like her.

Two months, nothing, but everything. Her mouth was ultra. The freaks started showing up, wanting it, she gave it, she took it. A few of them passed out, she sucked too much out of them. They never came back once they revived and left. Others, and more of them, her mouth was ready, so fucking ready for HIM. Where the fuck was he?

Well, here he was. It took another month for him to show.

The door opening to him, her smile telling him all had been forgiven, him stepping inside, she closing the door, locking it. Feeling how ready her mouth was. It was on fire.

He nodded, he never had been one to say much. He just fucked, came, and left. But not tonight. Tonight would be different.

“Drink?” He liked it before shit started. She got him some whiskey, but not too much, just a taste. “Fuck,” he said, that remembered grin of his making her sick of him already, “that’s it?” And her nodding, her sweetly given smile, that forgiven-you smile of hers, that mouth. He threw back the sip and kissed her. Yes, a good one, he was good at that, but she knew he knew he was good at a lot of things. That tongue of his, thrusting, poking, licking inside her dutiful mouth. And she accepting it, for now.

But now it was different, now she was more mature, she had passed through a dark tunnel, one he had created, and now she was on the other side, she was practiced, eager and ready, yes, for him.

He seemed stronger, rougher, but that was fine, she liked that too, she felt her cunt get tighter, wetter, it was only natural. She could handle it, just wait. Just let him fist her hair, spank her ass, ram his cock in her cunt, all that again, all of it, and when he pulled out he fishhooked her mouth, that fucking mouth of hers, she was ready for what he wanted to give her. She felt her throbbing swollen cunt where he had been, her juices running down her legs, inside her thighs, sure she was excited, but she had his thick cock in front of her now, and his fists were tight with her hair in them. It all came back, it was similar to before, and here he was again, that cock, that same cock, right in front of her, jutting up and ready for that mouth of hers. Well, then. Give it to me, fucker.

She sucked him easily at first, felt him get incrementally bigger. And then she started.

“FUCK!” he shouted. She felt those fists tighten, but he didn’t pull her off. She bit harder, sucked harder. Her mouth, that mouth of hers was ready, it was at the apex. She was going to make him her ultimate trophy. Harder, she turned it up, got her mouth in higher gear, her tongue engaged under him, her teeth gripping tighter. Soon, his blood, and that ignited her. “FUCKING BITCH!” She felt his hands, yes he was trying to get her off him but she sucked harder, she thought of her mother’s vacuum, when she put the palm of her hand on the end of the hose, such a strong suck that was, it was a powerful machine. That mouth of hers was just like it now, all that practice paid off.

“FUCKING STOP!” She scratched his ass, sucked him harder, and yes his blood, not from her biting, it was coming out of him now, it just made her suck harder, her mouth craved it, she sucked it out, sucked it straight out of his dick, and what a dick he was, such a motherfucking dick, he deserved this, she was just a teenager then, what did she know, she thought he loved her then, no he never said it but his face seemed to, that fucking face of his, that fucking cock of his in her vacuum-suck of a mouth, his blood oozing into it, his fists fighting at her head, sure he was strong but the pain she gave him weakened him, and she kept swallowing as it came out, came into her, the taste of it making her suck faster, harder, the intensity of his hands subsiding. She was sucking blood out of his cock, out of his body. She wanted to suck blood out of his fucking evil soul. Well, she did, in the end. He fell to his knees, his hands fell to his sides, his cock still hard in her mouth, that mouth of hers still sucking as he fell on his back, her teeth biting into him like pincers so she didn’t let it slip out. She sucked and sucked and swallowed and swallowed, breathing through her nose, hungry for more, hungry for his fucking death. She kept sucking kept swallowing, looked over his pubic hair, saw that his eyes were closed, saw his hairy gut moving up and down, kept sucking swallowing, her stomach full of his blood. She felt dizzy, felt full, but kept it up, kept sucking the fucking life out of him until his pig gut stopped moving. She felt his cock go limp in her mouth. She looked at his gut again. It was most definitely still. He was certainly dead. A person has to have some blood in them to stay alive. She sucked more out of him than he needed inside him. He was her involuntary blood donor, and now he was dead.

She released his cock and looked at it. It looked like a dead one-eyed animal that had been attacked by some vicious beast. Her bite marks looked lovely.

She had waited for this for what, four months? Five? It felt like a century.