“You have a mass.”
If you’re not a priest, those are NOT words you’re ever wanting to hear.
“What?”
The doctor cleared his throat.
“You have a mass, in the left side of your scrotum. We don’t think it’s cancer, it’s not like it on the screen, but we need to go in and take a look. I think that’s best, don’t you?”
No. “Sure, whatever you need.”
“First I’d like to examine you again. Up on there, please, shorts down.”
I lay back, hating him, hating her, hating here. Scared shitless and hoping amongst all of this that I wouldn’t drop a fear bomb while he was down there. My girlfriend, Lizzie, had been sucking me off in the shower, tickling my balls just so, just the way I like, when she stopped. Slurped off and left me hanging, staring at my crotch as water dripped and her fingers stopped tickling and started exploring. Pinching and squeezing. S and M’s never been my thing. But she’d found a lump, and she was scared, especially since she’d just had her mouth down there, and God knows I’m not a virgin, nor particularly careful. I guess it’s only right I gave in to her demands and got myself and my errant ball checked out.
She isn’t here. She’s got work. And maybe she understands, in that witchy way of hers, that I can cope better by myself. That I don’t want her here, stirring post-shower boners, triggering horrible blood spattered memories of the time she nicked the end of her nipple when I slapped her arse just as she was moving the razor to her pits for a shave. The end healed white. I don’t suck that side now. Fair’s fair, she’s not sucked me since our little shower adventure, either.
I concentrated on the gore, not her hot, soft, wet, vacuum cleaner lips, and felt the physician’s hands palpate and move my sac, and his coffee breath as he bent so close to my thighs I could count the dandruff flakes on the crown of his head. Don’t fart. Don’t fart.
“There may be an ingrowing hair here – that wouldn’t cause this size of mass, but there’s a small possibility it led to pores becoming blocked, a sebaceous cyst forming, something of that kind. I’d like to try and clear it, if that’s okay?”
It was unsettling, seeing his pale blue eyes peering up at me from between my thighs. I thought of flesh-eating zombies and guys I’d ‘known’ at college, and grunted my reply.
“I’ll spray a little local anaesthetic on it, take away the sting.” It was cool, and I felt my penis shrivel away from it. I’d have liked to have done 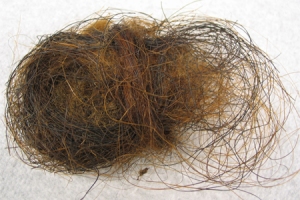 a runner, too. “Give it a second to take effect. Then I’ll try some gentle squeezing, and if that doesn’t release the hair, a little scrape and some tweezers should do it.”
A few minutes later, him humming Crowded House tunes as he washed his hands, me wondering if Lizzie would ever go down on me again, he re-appeared between my legs and smiled. He had lots of teeth. Lots of them, more than he was meant to, I think.
Down he went. The pinching didn’t work, so he tried the tweezers. They worked, boy did they work. He pulled, and pulled, and stepped away, and pulled. Still it kept coming. Lizzie was always complaining that I had a lot of hair ‘down there’, generally when she found herself gagging after a blow job, but hey, what’s a guy to do – trim it? Don’t think so. I’m not taking sharp stuff anywhere near there.
He measured it, checked online later, wrote me to let me know it was THE longest pube ever discovered. He said my left ‘testicle’ visibly deflated before his eyes. Apparently, I only ever had the one – the hair grew in and filled the space. I picture it coiling up like a sleeping snake, or a thousand rats’ tails, in the dark warmth of my scrotum. My phantom bollock.
At least it wasn’t cancer.
At least I get my blow jobs back.
And we’ll never have to buy dental floss ever EVER again.